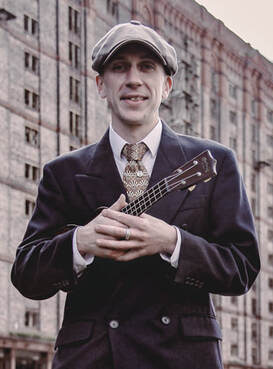 Hailing from Liverpool, UK, Ukulele Uff began his exploration into music making back during his school days when he joined forces with his pal Lonesome Dave. Uff started his music career by playing bass until he came across the ukulele and fell head over heels for it. Tired of lugging that giant double bass about he decided to take on the ukulele and hid away in a basement for many years perfecting his skills.

In 2012, Uff and Lonesome Dave joined forces as a duo making their UK debut appearance at the Royal Liverpool Philharmonic Hall, in Liverpool to much their acclaim. Fast forward another two years and the duo becomes a trio when lap steel virtuosso Brother Bill appeared, contributing spectacular renditions of jazz age Hawaiian classics and beautiful traditional melodies that complimented the sound of the ukulele and guitar perfectly.

Ukulele Uff began teaching advanced classes at Ukulele Club Liverpool back in 2014 and has been inspiring ukulele players both in our home town and all over the globe ever since, especially after appearing on the cover of UKE MAGAZINE with the Ukulele Uff Trio. In September 2016, Uff was invited over to Sweden to perform at the Ukulele Spellen, Guinness World Record attempt event where uke players from all over Europe gathered together but unfortunately the record was not to be broken but we had such a great time anyway. It has since been non-stop travelling for Uff and the Trio, impressing audiences with their brilliantly arranged renditions of obscure and wonderful 1920s/30s jazz, Tin Pan Alley classics and traditional Hawaiian music.
ENTER COURSE